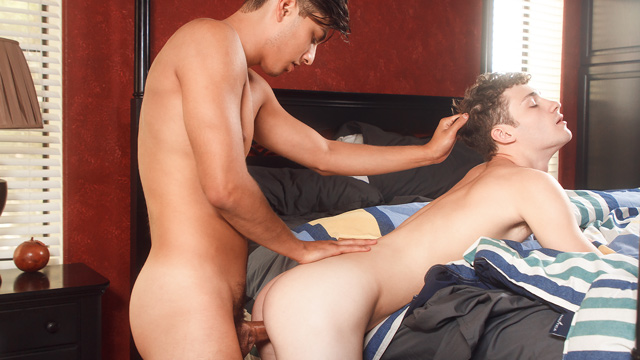 The best part of fighting with a boyfriend is ALWAYS the bangin' make up sex! Nobody does it better than fantasy fuck BF's Angel Rivera and Danny Nelson. After a heated argument, Angel is already packing and ready to leave when Nelson nibbles on his latin lover's neck igniting a reconciliation ramming of epic proportions! All the passion the pair put into fighting is poured into ferociously rough and raw fucking! Danny delivers a devastatingly delicious dick sucking to Angel's ample appendage and Rivera rewards the twink with a super hot schlong slap to that pretty face of his! The rough ramming rampage continues as Angel smacks his boy's booty, bends him over their bed, then crams every thick inch of bareback boner balls deep into Danny's dick hungry hole. The hot, angry ass assassination continues in a raunchy wrestling wang bang all over the bed with Rivera reminding Danny who he belongs to by smacking that amazing ass hard enough to mark his territory. Angel doesn't let up, laying it on hard and thick, complete with hair pulling prostate penetration and lusty throat chokes. As we pump towards the fucktastic finish line, the boys start to make up with passionate kisses as Rivera rams the cocked up couple towards redemption. The hard hammering causes Danny's dick to detonate like a rip roaring roman candle, shooting spunky seed up and onto his chiseled, convulsing, tight torso. Angel aims his well cocked weapon at his boyfriend's pretty mouth and unloads every ounce of milky magnificence down Danny's throat; and, just like that, all is forgiven. When you fuck like this, who needs couples therapy?!