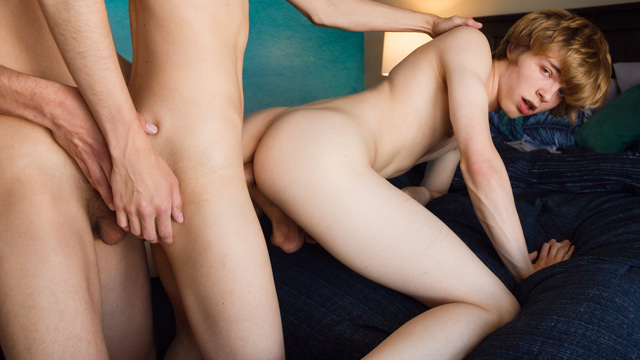 Jared Scott and Dustin Cook are splashing about at the pool when Jamie Ray comes by to catch some rays. He also catches an eyeful of fun when the tasty twosome's splashing turns into smashing! Cook has a mouthful of cock so Jared invites the blond boy to join in on the fun. Dustin and Jamie tag team Jared's giant jock with a double dick lick before Ray stands up so Cook can eat two cocks. Jamie gives Jared's jock another lick and then the twink whisperer suggests the guys take this inside so they can let their freak flag fly super high! Ray services both boy's big boners on his knees until Scott orders the twink onto his back for a mouth watering ass eating. Jared spits in the kid's smooth hole while Dustin straddles Ray's face for a butt munch-dick suck, cock stiffening combo. Scott checks the kid's oil with a probing finger before deciding he'd much rather have his member in there. Ray gets absolutely RAILED by Scott's super sized schlong while Dustin fucks his face and slaps the bad boy with his bone. Dustin's hole is getting heated, so he backs that beautiful butt right up into Jared's giant jock. Scott dicks the dude down in dirty dog while Cook gets a mouthful of cock from Ray in a raunchy good spit roast. Never afraid to say exactly what he wants, Cook orders up a raw ride and gets it when Jamie slides down his perfect pole. The boys switch it up again in a crazy hot train with Cook in the middle! Naturally, he's the first to cum. He pulls out and empties every ounce of ooze onto Jamie's back and butt. Ray flips over and Jared plunges his huge hog inside him while Dustin dangles his spent soldier in his face. Ray's nuts tighten while he tugs his trouser schnauzer till it spits white hot liquid lust all over his sexy six pack. Scott pulls out and splatters the blond bottom with seed, splashing the kid past his nips and drizzling the last drops on his dick, which Dustin licks up like a good boy.