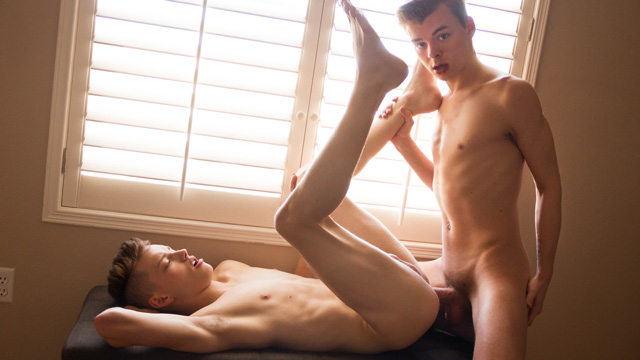 Sexy spring chicken Spencer Locke loves big cocks and Ethan Helms fits the boner bill and then some! This is Locke's first non-solo fuck flick so Helms helps coax the kid out of his shell with sweet kisses and a toe curling cock gobble! After eating a healthy helping of Spencer's sizable schlong he stands up, positioning his perfect piece in the newbie's pretty face. Locke lays into Helms' huge hog, sucking as he strokes his own fat phallus engorged with orgasmic excitement for his first couple's scene. The delicious dirty blond duo continue cock swapping until Ethan's hunger for Locke's luscious backside gets the best of him and he buries his tongue in the boy's super smooth 18 year old booty. Locke arches his back like an alley cat in heat as Ethan sands up to hammer the kid's hiney into submission. Spencer screams out for a severely hard slamming and gets it! Then, the newbie needs a taste of that top life himself so he offers Ethan ride. Helms hops on and bangs that beautiful blond boy butt hard, getting every inch of Spencer's schlong up in him. The new buddies flip again, this time the tasty new twink gets his tight end torn apart on his back with his heels to Jesus! Locke has been relaxing into the ramming, just enjoying the fuck for a while but now his big boner needs a release before it pops. He grabs his girthy groin and the thick dick goes off like a raunchy Roman candle, covering the kid's chiseled torso. The sexy sight gets Ethan's appendage ready for lift of and the lusty long dick launches it's creamy load onto our new twink. He bends down to plant a kiss on Locke, who looks luscious covered in both their loads.