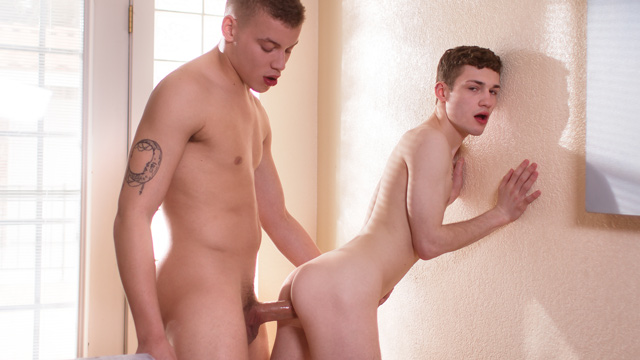 A breakfast boning is on today's menu as sun streams through glass block windows in the kitchen creating a feast for the eyes and a kaleidoscope of cock before Danny Nelson and Corbin Colby come into full focus. The celestial sunlight settles on these two heavenly bodies while Danny is sucking up a heaping helping of Corbin's big breakfast sausage. Apparently, the tiny twink was taught to clean his plate because not an ounce of cock goes uneaten, including Colby's big cum filled huevos. Beefcake boy's always know breakfast is the most important meal of the day so Corbin feasts on Danny's dick while grabbing his plump, morning muffins around the back. After a hearty meal, exercise is always important. Corbin is charged up and has that primal look in his eye telling Nelson he better brace himself against the wall to receive the stud's beastly hard bareback banger. The morning workout continues on the kitchen island where Colby lifts the twink's legs in the air and stuffs the kid's smooth hole with his massive meat. The cock cam cuts between the best batch of butt banging shots from each penetrating position, giving you every orgasmically good angle slam packed together nice and tight, just the way you like it. Danny has been working his long, hard swaying, twink throbber while getting stuffed with his hot top's tripod the entire time and the boy is right at the edge of ecstasy. He tosses his head back and blows boner juice high into the sky, it arches through the air then splatters back down by the dude's sinewy shoulders. Colby is cumming up right behind his beautiful bottom; so, he pulls that perfect prick out to give his twink a tasty treat. Keeping in sexual sync, Danny drops down to his knees to open wide for his morning protein shake. Pretty boy swallows as much of the heavy load as he can but a bit oozes out, due to the mighty amount delivered from his milk man.