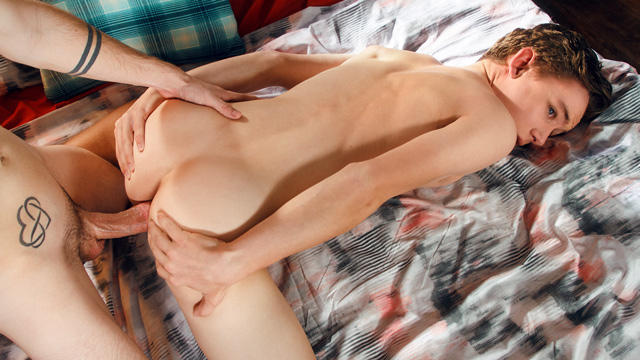 We join our two twinks mid-tickle/wrestling match as Cole Claire tosses around boy toy Leo Frost who apparently has several sensitive, sexy spots Cole just keeps hitting causing the kid to squeal with delicious delight. After our dirty blond boy Frost is calmed from of his lust filled laughter, he manages to tell Claire his dirty desires. The kid whimpers "I want dick." Cole is more than happy to deliver, but keeps the anticipation and excitement throbbing by saying, "show me how much you want it." Tight little bodied Leo whips off Cole's clothes and in downing that thick dick like it is fucking happy hour! Cole's got his "Master hat" on today while he reaches under Frost's red underwear clad caboose. He smacks the boy's beautiful booty, leaving a matching red hand print before softening the hand brand with a soothing tongue to the tush. Cole plants a kiss on Frost's "fuck me boy face" while he's on all fours before driving his big, bareback boner down to it's thick trunk like, big balled base. Cole has been hiding some SUPER hot top tendencies from us, but they're on FULL fuck me display here! His perfectly round bubble butt bangs his rock hard bone deep into Frost's uber smooth, fuckable fanny. Cole's skater boy hair dangles in his pretty face as he delivers raw dick hard and with perfect prostate precision. Cock sure Claire even sneaks around inside, fucking the kid with his fat fingers between boner bangs as he maps out his massive member's raunchy rout to his guys pleasure place before driving dick in again. Leo is completely lost in lust once Cole crams that cock back inside, jacking his jock till it spits like a ball player before swinging. Cole holds steady pressed all the way inside until Leo's done with every drop of liquid dick he's got. At just the right time Cole whips himself out of Leo's tight little hole. Cole's giant cock is throbbing and it's as big as we've ever seen, he soaks the sexy twink with pure porn perfection. THE money shot….. after shot….. after shot…..after shot.